One of the strategic objectives of the Cornwall Police Service (CPS) is to build trust with the members of the communities that we serve. Throughout 2022, we will be implementing listening tables, meetings, and growing our partnerships as a way to enhance our relationship and build trust with those whom we serve. We also want to introduce the community to the members of the CPS who serve the many residents and visitors of Cornwall, as a way of allowing the community to get to know some of our people, their backgrounds, and why they have chosen a career with the Cornwall Police Service.

Throughout 2022, we will be featuring these "Humans of CPS" on this section of our website. Please continue to check back as we add more faces to this compilation. 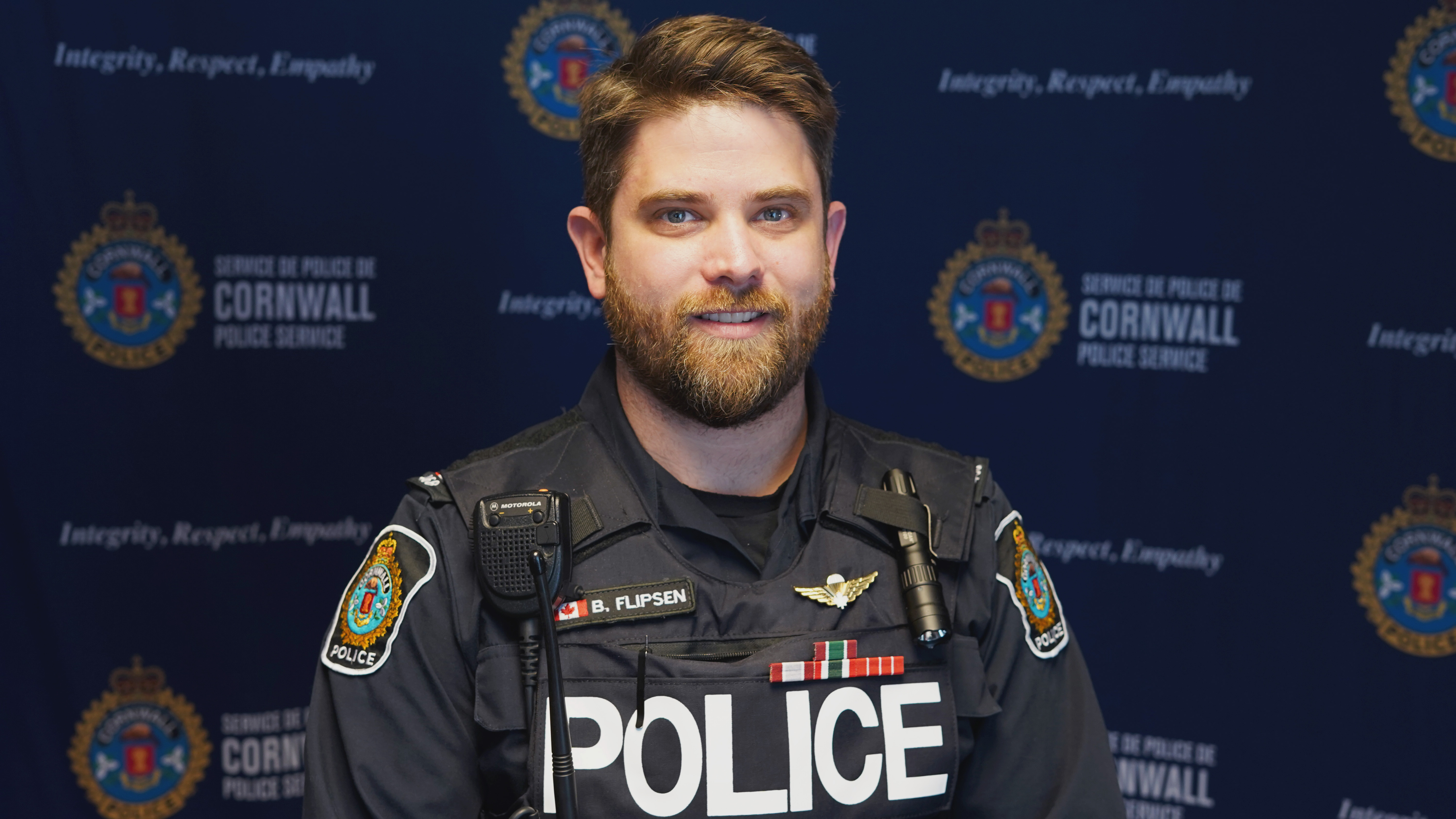 Originally from Maxville, Ontario, Cst.  Benjamin Flipsen joins the CPS with extensive experience from the Canadian Armed Forces Infantry, having been deployed in many parts of the world, including Afghanistan and Iraq.  He progressed in his career to the Canadian Special Operations Regiment (CSOR), where he became specialized in mountain warfare. He has also been trained in tactical combat, scene management, and tactical driving to name a few.

After ending his career with the CSOR in 2020, Cst. Flipsen made the decision to pursue a career in policing and applied to the CPS, wanting to become a part of a community-oriented police service.  He was successfully hired by the CPS in August of 2021 and attended the Ontario Police College for the 13 week Basic Constable Training Program. Since returning from the program, he is now teamed up with a Coach Officer, as he continues to launch his career as a police officer with the CPS.

Cst. Flipsen is married with two children. A fun fact about him, is that he is a talented banjo player.

The CPS is pleased to have Cst. Flipsen a part of our team, who offers our community an incredible set of life experiences, training and leadership, all the while demonstrating our core values of integrity, empathy and respect.

Meet Constable Justin Lafleur. Born and raised in Timmins, Ontario, Cst. Lafleur identified at a young age his interest in policing. After completing Police Foundations in college, he moved to Ottawa where he obtained a Bachelor degree in Criminology with a minor in Sociology. During his time in Ottawa, Cst. Lafleur worked as security at the Royal Canadian Mint, and joined the Royal Canadian Mounted Police shortly thereafter.

The Cornwall Police Service was thrilled to have Cst. Lafleur join our team in 2018. He is currently assigned to our Community Patrol Division.

Outside of policing, Cst. Lafleur enjoys hockey and spending time in the outdoors. Only recently was he introduced to the sport of skiing.

The CPS is pleased to have Cst. Lafleur a part of our team, who offers our community some great life experiences and knowledge, all the while demonstrating our core values of integrity, empathy and respect. 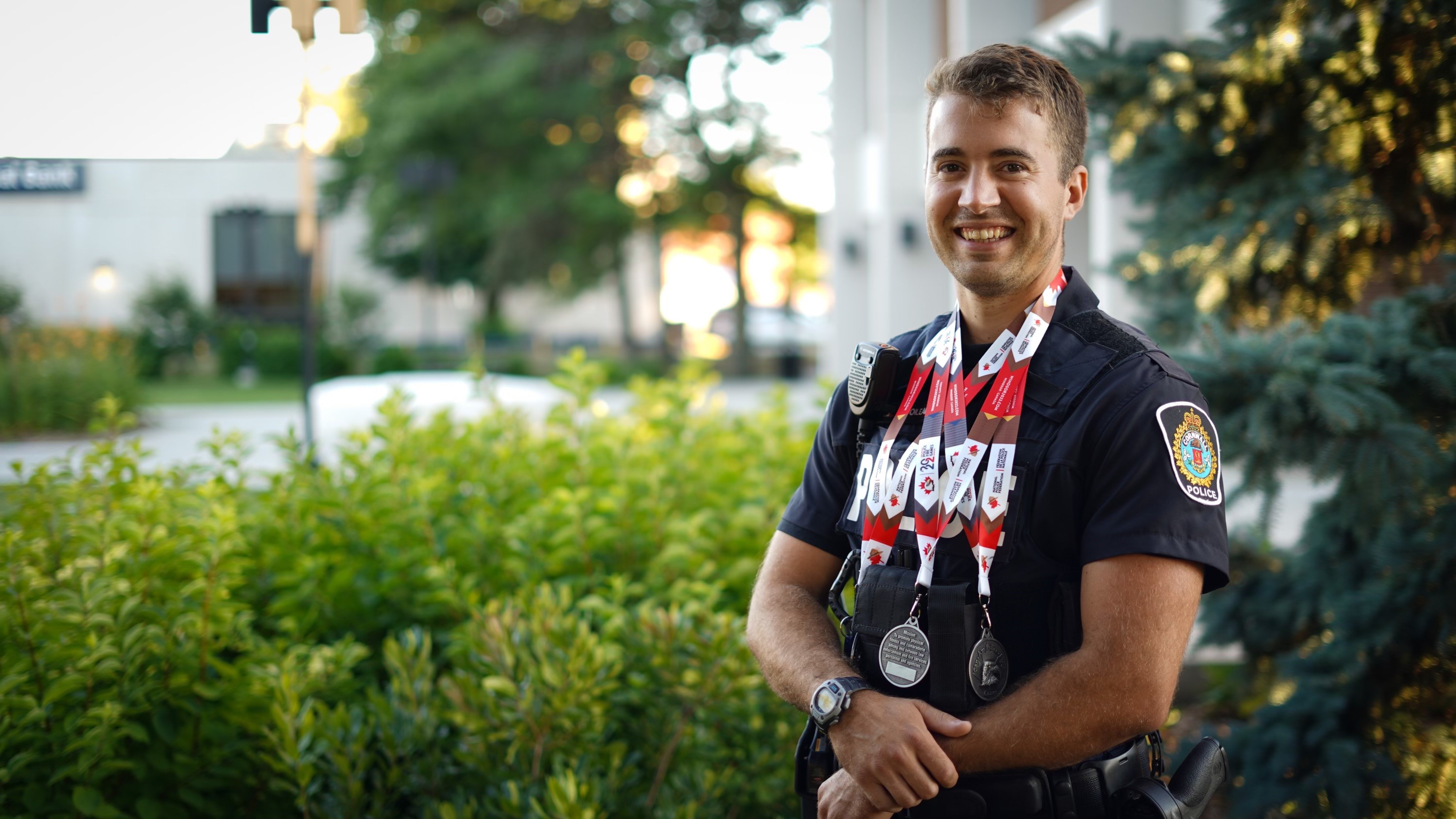 Constable Tylor Boileau was born and raised in Cornwall, Ontario. Upon completion of high school,  Cst. Boileau attended trade school and became a Gas Technician. In 2015, he decided to attend St. Lawrence College – Cornwall Campus where he took the Police Foundations Program to pursue a career in policing to serve the community. He graduated from St. Lawrence College in 2017 and received the President’s List Award. In 2017, he joined the CPS in a volunteer capacity as an Auxiliary Constable. In 2019, he was hired as a Police Constable.

Growing up in Cornwall, Cst. Boileau fell in love with track and field in grade school with his best event being the high jump. He continued track and field through high school while attending Holy Trinity Catholic Secondary School. While at St. Lawrence College, he began cross country running. Cst. Boileau enjoys the competitive nature and comradery of track and field events. When he isn’t competing, you will find him cheering on his competitors.

On Saturday, July 30th, 2022, Cst. Tylor Boileau, attended Windsor, Ontario to compete in the Can-Am 2022 Police Fire Games. He competed in three track and field events, being the high jump, triple jump and the long jump. He represented our service proudly and won three silver medals.

In 2021, Cst. Boileau received the Cornwall Police Service Board Award for Preservation of Life.

Cst. Boileau is married and has one child.

The CPS is pleased to have Cst. Boileau a part of our team. His ability to connect with members of the community is where he demonstrates the CPS core values of Integrity, Respect and Empathy.